Seventy-eight men in Toronto Blue Jays history have at one point or another been a part of the team’s coaching staff. Out of all those coaches, 21 of them never even played a big league game. That leaves a 57 men group of ex-Major League ballplayers who later took on a role as a staff member on the Jays bench.

With this information, I created a 25-man roster, a roster filled with Blue Jays coaches in their heyday as young talented MLB players. In this case, there isn’t a staff to decide on the roster, so bWAR is the brain behind the ball-club. The player (Coach) at each position with the highest career Wins Above Replacement total will be assigned the starting role on the club. Just like an actual team, if a particular position is in-need of an upgrade, the mathematical system with no emotion is actually willing to move a player from a place of depth to their secondary spot.

Gene Tenace beat out competitors Ernie Whitt and Buck Martinez to earn the starting role on the mythical team. Tenace produced a 46.8 bWAR over 16 years in the big leagues. The Oakland Athletics catcher was an All-Star, four-time World Series Champ and the MVP of the 1972 WS. Tenace spent two stints with the Blue Jays. He was the bench coach during the World Series seasons in ’92 and ’93. After years away from the game, he later reunited with Cito Gaston in 2008 and 2009 as the club’s hitting coach.

Willie Upshaw was the first player in Blue Jays history with 100 RBI’s in a single season. In 1983, he drove in a total of 104 runs. Upshaw spent nine years in Toronto hitting 112 Home Runs while accumulating a bWAR of 12.8. He was one of the first great players in Blue Jays history and was a big part of the squad’s first postseason berth in 1985. The former first baseman rejoined the Blue Jays in 1996 as the club’s hitting coach but only spent two years in that role. After Mel Queen replaced manager Gaston, a brand new coaching staff followed, and Upshaw’s tenure was over.

The great Hall of Famer Bobby Doerr made for no competition as he was the clear starter on this roster. His 51.2 total WAR is the highest number out of all Blue Jays coaches. “The Silent Captain of the Red Sox” was not only a great gloveman at second baseman but a massive threat at the plate. In the Jays inaugural season of 1977, Doerr was the hitting coach for Roy Hartsfield’s club. He stayed with the team until the end of 1981.

With a 28.7 total WAR, the third baseman who replaced George Brett will be covering the hot corner on this club. Kevin Seitzer enjoyed a successful playing career with the Kansas City Royals, Milwaukee Brewers, Cleveland Indians and Oakland Athletics. He appeared in two All-Star games and a World Series with the 1997 Indians. Seitzer only spent one year north of the border. After joining the staff for the 2014 season, he left the club to join the Atlanta Braves. Seitzer did a terrific job in the ’14 season. His most notable impact was opening up the eyes of the Jays previously pull-heavy lineup.

The shortstop most remembered for his days with the California Angels was more than just the guy on the wrong end of the Nolan Ryan trade. Jim Fregosi was the first of many stars in Anaheim. After making his debut in the club’s inaugural season, he ended up being elected to six all-star teams. Fregosi’s post-playing career involved stints managing four MLB organizations including the ’93 Phillies who were beaten by his future club, the Blue Jays. In Fregosi’s first two years north of the border, the club finished above the .500 mark, but that was not enough to keep him around for a third season.

After being picked with the 17th overall pick in the 1968 draft, Gary Matthews went on to have an excellent career. Over his 16-years in the game, he hit for a slash of .281/.364/.439 with more than 200 home runs. One of the more unusual facts about the left fielder is that he and his son are one of only 12 father-son duos to both hit at least 100 home runs. His tenure in the Jays dugout was short and forgetful as he is probably better remembered for his two years in the radio booth.

Dwayne Murphy was one of the most excellent fielders to ever race around the Oakland Coliseum. The Athletics center fielder won six straight gold gloves in the ’80’s while also hitting in the middle of their lineup. Murphy’s career as a Blue Jays coach was a great success. His biggest accomplishment was the impact he had in transforming Jose Bautista into “Joey Bats.”

Lloyd Moseby got bumped to right field based off of Murphy’s excellence, but he was no slouch himself. The Blue Jays center fielder was the “straw that stirred the drink” on the mid ’80’s teams. He could run, he could hit, and he could hit for power; a perfect toolset for a two-hole hitter. Since his playing days, Moseby has been an excellent ambassador for Canadian Baseball. His career bWAR is 27.5.

The double play combination of Fregosi and Bobby Knoop led to plenty of putouts for Angels pitchers. Most of Knoop’s value came from his glove which makes him a curious choice for the DH spot. But since Knoop played before the rule came into effect, we are using the slot differently. After Knoop’s days in Los Angeles, his career took a detour as he stopped seeing regular playing time. The slick infielder was the first base coach for Fregosi’s ’00 club.

The Michigan born catcher is backing up his fellow coach Tenace on this team. Whitt; An original Blue Jay, is one of the finest catchers Canada has seen. He is the only Toronto backstop to hit over 100 homers, drive in 500 runs, and steal over 20 bases. Whitt spent four seasons on John Gibbons’ staff.

The career-long utility infielder was a “Main-key” on three different clubs. Menke was apart of one of the worst trades in baseball history. He was traded by the Houston Astros to the Cincinnati Reds in the “Joe Morgan deal.” Menke was a starter on the ’72 and ’73 clubs that appeared in the NLCS before finishing off his career with the Astros in ’74. He was the first base coach in both of Bobby Mattick’s years with the Blue Jays.

Cookie Rojas had quite an interesting career. Although the five-time all-star played every position in his career, a rare achievement, when I think off Rojas, I’m reminded of the “Curt Flood deal.” Rojas was traded to the St. Louis Cardinals in the deal that would’ve sent Flood to the Phillies. Flood refused to be traded and ended up playing a total of 13 more games in his career. But the brave move led to the birth of free agency. Rojas was the manager of the 1988 California Angels and later the bench coach in Toronto.

Out of Ohio State University, Hisle had a quality MLB career. He was a two-time all-star and a career .273/.347/.452 hitter. He played for Minnesota, Milwaukee, and Philidelphia, ending up with a 25.0 WAR. Hisle was the hitting coach for the World Series-winning teams of ’92 and ’93.

The current Blue Jays hitting coach was quite a hitter himself. In 11 big league seasons, he picked up 1220 hits and 120 homers. Jacoby joined the Blue Jays coaching staff in 2015, just in time for back-to-back playoff appearances.

The first ever Blue Jays pitcher to win a Cy Young Award was no one other than Pat Hentgen. After five mediocre years in Toronto, Hentgen finally had his breakout season in 1996. In 265.2 innings pitched, he went 20-10 with a 3.22 ERA. He ended up as the fifth-winningest pitcher in the history of the Blue Jays. He spent one year as the full-time bullpen coach before stepping aside to take care of his family.

Dave Stewart, one of the more intimidating pitchers of his generation, had a terrific career. Stewart was a huge part of the late 80’s, early 90’s Oakland Athletics teams, winning the World Series in 1989. Stewart was a big game pitcher. He was named the WS MVP and ALCS MVP with the Athletics in ’89 and ’90 and later the Championship Series MVP with the Blue Jays. He was the pitching coach for only half of the ’00 season before being replaced.

Rick Langford was the Blue Jays pitching coach for the other half of the 2000 season. If I had to describe Langford in only three words, the three words would be; An innings eater. In the prime of his career, he threw back-to-back-to-back-to-back years of 14,28,18 and 15 complete games. Talk about keeping your bullpen fresh. 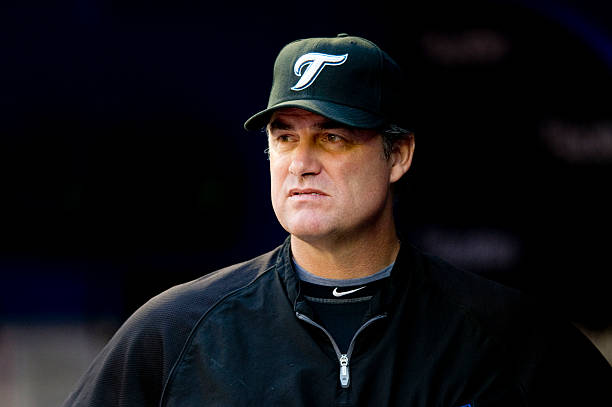 John Farrell had a quality career as a big leaguer, pitching eight seasons and tacking up a 7.3 WAR. But around Canada, he is better remembered as a manager. Farrell spent two non-exciting years in Toronto before leaving for his “dream job” in Boston.

Galen Cisco’s playing days were nothing to jump up about. He played seven years in the MLB finishing with a .309 winning percentage. Cisco was a big part of the Blue Jays World Series-winning teams. He helped develop some of the most excellent pitchers in the franchise like Hentgen. The Montreal Expos also used his services. 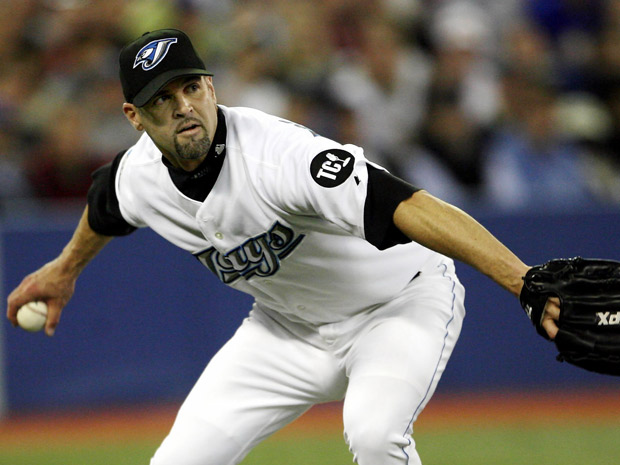 Bob Stanley put together an impressive career over 13 years in Beantown. Stanley picked up over 100 wins along with over 100 saves. Since the team’s first year in 1901, nobody has made more appearances than “Stanley Steamer.” In the 2014 season, Stanley took over for Hentgen as the pitching coach.

Bob Miller; the 17-year major league vet, is a two-time World Series champ. He won a championship with the Dodgers in ’65 and Pirates in ’71. Miller joined the Blue Jays for their first season as the pitching coach.

Mel Queen had a few solid years in the pros, pitching for the Reds and Angels. But the man from New York made his most enormous impact a few hour drive away. Queen is recognized for turning Roy Halladay into the Hall of Famer he is soon to be named. Queen twisted Halladay into a whole different pitcher after they first met in Dunedin.

Pete Walker first met John Gibbons in 2005 as a Blue Jays reliever, and less than ten years later, Walker was named to be the man behind the starting staff. After spending a year in charge of the Jays bullpen, Walker took on the role as the club’s pitching coach. Walker has done a tremendous job in his time in Toronto. Just two years ago, the pitching staff he was in charge of led the MLB in ERA.

The man born in Tulsa, Oklahoma played professional ball 30 years before he became a big league coach. Once he began coaching, it took a while for him to stop. Widmar was the Jays pitching coach from 1980 through 1989. The rotation he was in charge of were led by arms such as Dave Stieb, Jim Clancy, Jimmy Key and Doyle Alexander.

Barely managing to nail down a spot on this roster was the Seattle born pitcher. Just like Galen Cisco, Arnsberg was a pitching coach for both the Expos and Blue Jays.

This was the 25-man roster of the greatest Blue Jays playing coaches.

Jesse Levine has a tremendous interest in all aspects of baseball. He cares for Sabermetrics and Statcast and is an old-school baseball fan who loves the history of the greatest game in the world. It doesn’t matter if you want to talk about Andrelton Simmons’ UZR or 1954, he loves Talkin’ Baseball.